What a week! The Christmas Fair was a roaring success on Tuesday and then this morning, we were joined by our friends from Ingol Community and Holy Family for one of our ‘cluster events’.This time, it was the turn of the junior children and we had archaeology as our focus.

We looked at how archaeologists look at people from the past and their lives. We were looking at five different periods of time from history and trying to work out where our ‘samples’ came from. The historical periods were: the Anglo-Saxons, the Vikings, the Romans, the Aztecs and the Tudors. The five ‘samples’ were excrement (that’s poo!!) from the different times and we had to work out-by analysing the contents of the ‘sample’-which time in history they were from.

The children worked incredibly hard and used many higher order thinking skills throughout the morning, including information processing, analytical skills, logical thinking, lateral thinking, synthesising, hypothesising, deduction and inference. They really deserved their biscuit and juice at the end of the morning!

The ‘samples’ were (of course), not real and had been made the night before in my kitchen at home (much to the bemusement of my family!) They were made from salt-dough (mixed with gravy browning) and had all had different items added to them, to replicate the sort of things people of those places and times would have eaten, including grains, lentils, maize corn, pepper seeds, melon seeds, orange pips, apple pips and fish bones, to name but a few. By far the most disgusting addition, was the parasite-tape worms (that were actually made from rice noodles!)

The children had a great time and enjoyed working with people from other schools. They all received a very well-deserved certificate for their efforts. Well done.

The challenge this week:

Here is a set of shapes. For this problem we will call them pieces.

These problems ask you to arrange the pieces in a line so that you change either colour or shape in the next piece along. If we start with a blue triangle the next shape has to be either another triangle or another blue shape.

The first puzzle is to arrange all the shapes in such a line starting with the blue triangle and ending with the red circle. There are lots of different ways of doing it! 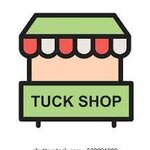 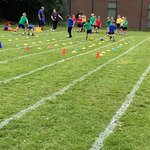