This week in singing assembly we learnt a new song called Jubilate Everybody and we enjoyed changing the tempo to this hymn, especially

going faster! We also practised Sorida again and we all did the actions with a partner.

Our new hymn My Lighthouse is also coming along nicely and we only have one section to learn now.

In Nursery and Moonbeam class we sung lots of action songs and some of us got quite out of breath. Nursery enjoyed singing The

Whole World in his hands and are good at the actions now. They also enjoyed playing the instruments in time.

In Moonbeam for our pirate topic we sang lots of di'erent songs. We sung a new one called The big ship sails on the alley alley o and we tried to do the actions in a circle. We will need to keep practising this but it was very funny when our arms got all tangled up!

robot, mouse and pig! We had lots of fun with this song. We also practised clapping different rhythmic patterns and have learnt the note values quaver, crotchet, minim and semibreve. We practised writing notes on the stave and had some time to play the glockenspiel.

In Gold class we spend half the lesson learning new notes on the recorder. We can nearly all play London’s Burning now and we also

learnt Twinkle Twinkle. By the end of the session this was sounding excellent. We will take a video clip to show you next week. The other

half of the lesson we continued learning musical notation and had a competion to write as many words as we could using musical notes.

Shaniyah even thought of a 7 letter word 'cabbage' using the notes. 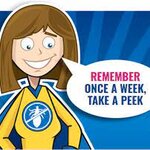 Once a week take a peek