It has only been 4 days but it feels like we have been back for ages! We now have Mr Blackburn teaching us all the time again (boo!) In English we started our new Topic about Greek Myths. They had complicated names in those times! Icarus, Daedalus, Epimetheus, Prometheus, Pandora and more! On Friday we wrote our own version of the myth about Icarus, who unfortunately flew too close to the sun! In Mathematics we have been learning how to double numbers with one and two decimal places using partitioning. After some struggles earlier in the week, most of us have now mastered this.

We created a comic strip about the Easter story in RE and read a comic booklet that our Chair of Governors brought in for us to look at. In PE we started improving our rounders skills. In Computing we are starting to look at blogs. By the end of this half term we will all be experts!

“King Minos kept a Minotaur underneath his palace” – Elle Ormerod

“The Gods did not like people having too much pride!” – Rebecca Jones 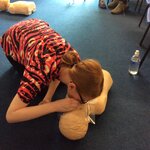